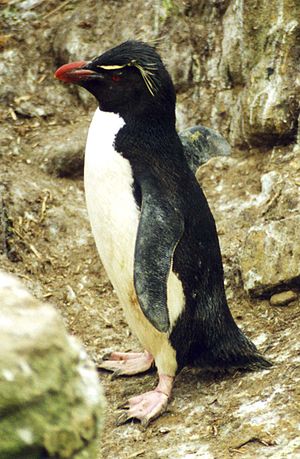 For a great animated flick with a hint of conservation I would recommend the new movie, Happy Feet. The main theme is about a young Emperor Penguin who can’t sing the typical mate attracting song, but rather has a knack for dancing.

The Independent in the UK recently had an article about the dramatic decline of the Rockhopper (Eudyptes chrysocome), one of the penguin species featured in the film. There has been almost a 30% decline of Rockhoppers on the Falkland Islands in the last five years according to RSPB (Royal Society for the Protection of Birds). And looking at figures from 1932, when there were approximately 1.5 million Rockhopper pairs, the decline is around 85%.

The cause for the decline isn’t exactly clear but theories range from algae blooms linked to climate change to a massive shift in the ecology of the Southern Ocean. The algae blooms affected the 2002-03 breeding season and the Rockhoppers have not been able to recover from that although other species such as the Gentoo Penguin have made a comeback.

Alarming is the fact that of the worlds 17 penguin species, Rockhoppers are one of 7 species with an IUCN listing of vulnerable plus there are 3 species that are listed endangered.

Winter on the Upper West Side

Back to the Dacks