There aren’t many species of birds that you can find only in Florida. Most of Florida’s herons and egrets can be found up the east coast and Gulf coast, and many of Florida’s passerines and raptors migrate north in the spring. On the small list of Florida specialities is the Limpkin. Limpkins are only found in Florida’s fresh water marshes (with sporadic records in the south eastern United States). Limpkin used to be commonly found in south eastern Georgia. Limpkin are also found in Central and South America.

Limpkins (Aramus guarauna) are the only member of the family Aramidae (genus Aramus), and are closely related to Rallidae (rails, coots, and moorhens) and Gruidae (cranes). These three families make up the order Gruiiformes. There are fossil records of extinct species of birds that may have also been members of this family.

Limpkins look most like small cranes in appearance. The back of a Limpkin appears spotted, and is reminiscent of a European Starlings speckled plumage. Its downward curved bill can be mistaken for that of an Ibis. Males and females look alike. It is hard to miss a Limpkin, with their loud wailing calls to each other, giving any wetland where they are found a very tropical and exotic feeling.

Limpkins eat mainly apple snails and other mollusks, but will also eat frogs, lizards, or insects in times of drought. Their range in Florida is almost entirely associated with that of apple snails, which isn’t surprising, because their long bill is specialized in removing snails from their shells (usually without breaking the shell!).  There are five species of apple snails in Florida, but only one is native, and Florida is the only place in the world where the native Florida apple snail occurs.  They can live to be two years old and can grow to the size of a plum!  Apple snails face conservation issues of their own that in turn affect the species that depend on them, like Limpkins and Snail Kites.  Apple snails have been greatly and negatively affected by poor water management practices in Florida associated with agriculture and development that have changed natural flows and depths of water.

A great place to find Limpkins in South Central Florida is Lake Okeechobee (the second largest lake in North America). I haven’t had time to fully explore the edges of the lake, but the north eastern marshy edge is teaming with Limpkins. It is hard to go a few minutes without hearing a Limpkin call echo over the lake, with a quick answer from another. While they are usually quite secretive, I’ve seen Limpkin out foraging in open water at the lakes edge, and they frequently fly low in view over the marsh grasses here. Another great place to see Limpkins in at Orlando Wetlands Park. Otherwise, you can find them along the edges of Florida’s numerous channels and canals, foraging on floating vegetation and in reed beds. They are (fortunately or unfortunately?) easily habituated to people, and can also be found in the ponds and wetlands of Florida’s ridiculously excessive housing developments.

Earlier this year in January at Lake Okeechobee, Alex and I saw a Limpkin take flight at the same time as an American Bittern! With luck like that, I figured I’d make this year another big year (I missed American Bittern on last year’s list).

I took the following photos at Lake Okeechobee about a month ago! 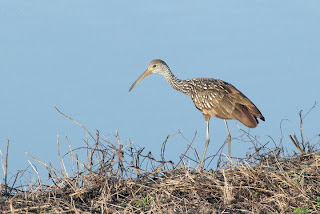 Limpkin walking along a canal in Highlands County, FL (photo by Alex Lamoreaux)

The Magic of May Migration